The Pirates of Penzance

The pirates of Penzance are a rather tender-hearted band, made up exclusively of orphans and they are unable to bring themselves to harm or offend anyone of a similar background. They are celebrating Frederic’s coming of age and subsequent release from his apprenticeship to them. He joined the pirates as a child owing to a mistake by Ruth, his nursemaid, who misheard his father’s instructions to apprentice him to a pilot. She has remained with Frederic ever since and now harbours a desire to marry him.

However, Frederic meets and falls in love with Mabel, whose sisters have been claimed by the pirates as their future brides. Their father, the Major-General, is horrified at this prospect and declares himself to be an orphan, knowing that this will effect their immediate release. As an ex-pirate, Frederic now feels that his duty is to society and he wastes no time in assembling a police force to capture the pirates. He is, therefore, dismayed when he learns from Ruth and the Pirate King that, due to the fact that his birthday is on 29th February and only occurs once every four years, he has in effect only had five birthdays; the terms of his apprenticeship state that he is bound to the pirates until his 21st birthday!

Consequently, feeling that his loyalty is now to the pirates again, Frederic reveals that the Major-General is not really an orphan. The Pirate King is furious that he has been tricked and plots to capture the Major-General, his daughters and the police and take his revenge. This task proves no problem to his band of men until the Sergeant of Police demands that they surrender in the name of Queen Victoria. This is too much for the pirates and they yield to the request. However, as they are about to be taken into custody Ruth reveals that they are not really pirates at all, but noblemen who have gone astray. On hearing this, the Major-General orders their release, restores them to their rightful ranks and offers them his daughters in marriage.

So a happy ending for the pirates, the daughters, the police, in fact everyone! There are many laughs throughout this entertaining and wonderfully updated version of one of Gilbert and Sullivan’s most famous stories. Diehard fans of G&S and newcomers to the Pirates of Penzance will be laughing out loud at the ridiculously fast patter songs, humour and antics of everyone on stage. 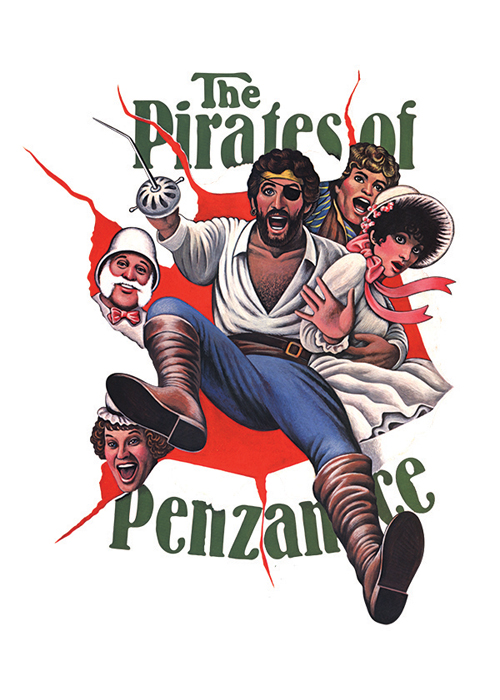 Great entertainment and great fun, well done everyone involved. What fantastic value too and with such outstanding performances – why go to the West End in London?

Came to see it last night. Thoroughly enjoyed it. I thought it was very funny. Well done!

A great show! Really enjoyed it, very well done to all involved!

What a wonderful evening!!! We were there last night and absolutely loved it. It was great to see such a high quality performance and also that the younger generation are getting involved and enjoying it too. All highly entertaining. Keep up the good work. Ashby has definitely got talent!

My wife and I enjoyed Pirates last night. We thought the show was excellent. Some very good singing and lovely humorous touches which kept the audience very well entertained. Thanks for a real treat.

What an amazing week…congratulations to everyone…performers, crew, back stage support, band and production team. The show really was outstanding – such a wonderful group of people to be friends with at AMTG.

Wow. A massive congratulations to all performers, backstage crew and tech crew for an incredible show last night! The band were brilliant – a perfect accompaniment to the action on stage, very tight indeed and sounded fantastic. The lighting – very accurately done alongside the on-stage movement, very professional! And the acting on stage – absolutely wonderful! The characterisation of everyone was definitely there, along with beautiful singing, perfect comedy and emotional timing, and no forgotten lines (sung or spoken) as far as I could tell. The whole performance was so magnificently professional and I’m so lucky to have watched it unravel.

Thank you to everyone involved for such a magical production of Pirates.
It was certainly the best amateur production I have seen (and I have attended many in the last 60 years!). It was even up there with the ENO production I saw two years ago. It beat even that for humour. To add to Gilbert’s sense of fun without losing the original was a joy to see (and hear). I would particularly like to congratulate the younger members of the cast for their enthusiasm and obvious talent, so rare in G & S since I don’t know when! All the Principals were truly magnificent. Everyone, in fact, was truly magnificent. This is the first amateur production I have seen where the chorus didn’t stand woodenly when not actually singing. Congratulations to them for their acting ability. I should say that I enjoyed the patter song from Ruddigore being dropped in and although it was a surprise it fitted beautifully. (Perhaps I am giving praise to you which should have gone to the Americans as I have not seen the Broadway version before!). Thank you all once again for a truly wonderful evening.

Hilarious show tonight and so nice to see so many familiar faces, both on stage/involved with the show and in the audience. Break a leg for the last day!

What a fantastic performance by everyone tonight. I couldn’t stop laughing! Looking forward to seeing you all September.

Hover cursor on above text to hold review