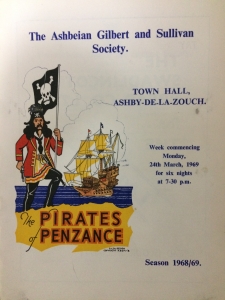 In 1969 we took to the stage under our original name (the Ashbeian Gilbert and Sullivan Society) at the Town Hall in Ashby to perform The Pirates of Penzance.

It seems rather fitting that 50 years later we will be setting sail again for Cornwall in April 2019 with this classic comedy which boasts one of the most famous patter songs in musical theatre history. A fresh take on one of Gilbert and Sullivan’s most popular comic operas, our hilariously updated version took New York by storm when it premiered in Central Park in 1980, leading to a subsequent smash-hit Broadway run.

The story follows young Frederic, an orphan who has mistakenly been apprenticed to an ineffectual but raucous band of pirates. Frederic rejects the pirates’ way of life and falls for the beautiful Mabel who is won over by his melodious singing. When the Pirate King discovers Mabel’s father, Major-General Stanley, has lied about being an orphan to keep the pirates from stealing all of his belongings and carrying off his bevy of beautiful daughters, it leads to a fabulously funny stand-off between the swashbuckling pirates and the police.

With so many memorable rôles in this fabulous production, we’re delighted to be bringing it to Repton, and give a gracious bow to our former Members from 1969 as we tread the same rocky coastal pathway through this hilarious show.

The Box Office at amtg.org.uk will be live very soon, and we are also still very keen to hear from budding pirates, daughters, and police officers who would like to join us. New and returning Members are always welcome – please send a message to [email protected] and we will let you have all the information necessary to have fun with the greatest and friendliest of theatre groups!

One month to our new Season!AMTG has The Great Adventure!
Scroll to top